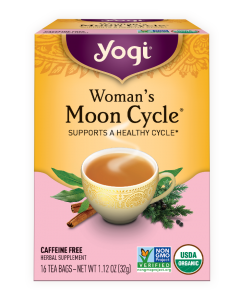 We combine Raspberry Leaf, traditionally used for centuries to address common menstrual discomforts, and Chamomile which has been used for centuries to help soothe the mind and body. Infuse harmony and comfort into the days of your monthly cycle with a calming cup of Woman’s Moon Cycle® tea.*

To get the most out of every cup, bring water to boiling and steep 5 to 10 minutes. For a stronger tea, use 2 tea bags. Drink 1 to 3 cups a day. During premenstrual days, drink 4 to 5 cups throughout the day.*

Chamomile is a flowering plant in the daisy family that is native to Europe and Asia. The flower is a mild relaxant that supports balanced mood; hence a cup of tea made with chamomile is a time-honored herb used to promote sleep.

The leaves of the raspberry plant have been used as a medicinal herb for centuries and is traditionally recommended to support the uterus.

Anise Seed is a tasty culinary herb from the parsley family. In the herbalist’s world, anise seed is known mainly for supporting the digestive system, helping to reduce gas and support efficient digestion. Today, throughout Asia and Europe, anise seed is used to help support respiratory and throat function.

Dong Quai Root is the most respected woman’s herb in Traditional Chinese Medicine (TCM). An herb in the celery family native to China, Japan, and Korea, it has been used for centuries to support the reproductive organs and to help regulate the menstrual cycle. TCM also uses this herb for maintaining blood pressure levels already within a normal range and for supporting healthy lung function.

Chaste tree is a large shrub (up to twenty-two feet tall) native to the Mediterranean and southern Europe, where it flourishes along riverbanks and nearby foothills. The tree produces a dark brown, peppercorn-size fruit that has a pleasant peppermint-like odor. Chaste tree berry was used medicinally by ancient Greeks and Romans to encourage chastity, but in the first years of the common era, the Greek physician Dioscorides recommended chaste tree berry specifically for support of the female system as well as to support milk flow shortly after birth. Today, herbalists use chaste tree berry primarily to support the health of the female system.

A juniper berry is not a true berry, but is a seed cone with unusually fleshy and merged scales that give it a berry-like appearance. Used as a spice in European cuisine, juniper berry has been used in traditional herbal medicine to support kidney and urinary tract function, as well as to help maintain healthy blood pressure levels that are already within the normal range. The essential oil can be stimulating to the kidneys. The warming and bitter properties support digestion and can soothe intestinal gas. Juniper berry can also be warming for the joints.

Parsley Leaf is a bright green biennial herb with a long history of culinary use in the Middle East, Europe and North America. It also has a long history of use in herbal medicine to support the urinary system. Parsley is diuretic, and so has been traditionally used to support the bladder and can help generally with proper water balance in the body.