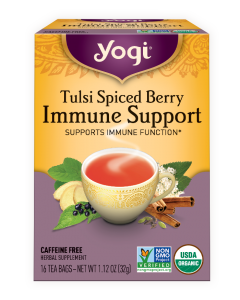 Our Tulsi Spiced Berry Immune Support tea combines Tulsi Leaf and Elderberry to supply antioxidants and naturally support your immune function. We add warming herbs traditionally used in Ayurveda along with Blueberries for a delicious and comforting tea to support your overall health and well-being.*

Tulsi Leaf, also referred to as Basil Leaf or Holy Basil, is a delicious and well-known culinary herb that is rich in antioxidants. Tulsi is considered a warming herb and has been traditionally used to support the immune system and overall health.

Native to Europe, elderberry has been used in European folk medicine since antiquity. Elderberries supplyanthocyanidins – powerful purple pigment compounds that act as antioxidants. Elderberry can also help support respiratory function, and is used by herbalists to soothe the throat.

Nutmeg is an evergreen tree native to Indonesia and is the only plant that is the source of two different spices. Nutmeg is actually the seed of the tree, while the dried lacy reddish covering or aril of the seed gives us mace. Nutmeg has a sweet, nutty aroma and slightly sweet taste.

Lemongrass is a tropical herb that is popular in Thai cooking. Traditionally, is has been used to support normal respiratory function. Lemongrass tastes great and is a warming herb that can support digestion.

Clove Buds are the aromatic dried flower buds of a tree in the Myrtle family. The English name clove derives from Latin clavus (nail), as the shape of the buds resembles small nails. Clove bud is widely used as a spice in ancient Asian herbal traditions. With a warming quality, clove supports circulation and digestion.