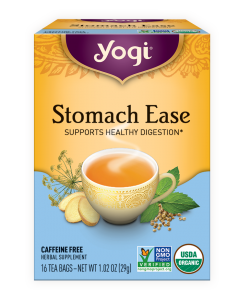 Yogi Stomach Ease tea combines perfectly sweet yet earthy Fennel Seed and Licorice with a refreshing combination of Peppermint and warming herbs Cardamom, Coriander and Ginger that can help support digestion.* Unwind with a warm and soothing cup of Yogi Stomach Ease tea, enjoyable any time of day or night.

To get the most out of every cup, bring water to boiling and steep 5 to 10 minutes. For a stronger tea, use 2 tea bags. To support healthy digestion, drink a cup with your meal and repeat 15 to 20 minutes afterward.*

Coriander seed is not just a delicious spice used in cooking. According to Ayurveda, the seeds can support the urinary tract and can help soothe the stomach.

Peppermint is a perennial plant that produces light purple flowers and green leaves with serrated edges. Commonly used as a flavoring in products such as candy, chewing gum, toothpaste, and ice cream, peppermint also has been used traditionally to cool the body by promoting sweating, which can help support the respiratory system. Peppermint has also been widely used to support digestion and to soothe an occasional minor upset stomach.