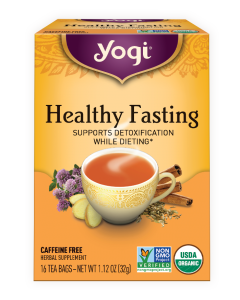 To get the most out of every cup, bring water to boiling and steep 5 to 10 minutes. For a stronger tea, use 2 tea bags. Drink up to 10 cups a day.

Garcinia cambogia fruit, an exotic fruit from South India that has been traditionally used to help support stamina.

Red clover is a member of the Pea family, which includes not only peas, but also beans and peanuts. In herbal medicine, red clover flower is used as a general detoxifying herb. It has a pleasant sweet taste.

Alfalfa Leaf is a very mild, food-like nutritive plant in the pea family, which has been used in traditional herbal medicine for over 1,500 years. It is a natural source of protein, calcium, vitamin A, vitamin C, vitamin D and more.

Hawthorn Berry, sometimes referred to as English Hawthorn Berry, comes from a small, spiny tree that is indigenous to all of Europe and the Mediterranean region. According to Ayurveda, tart/sour tastes help promote digestive function. As such, this sour berry has been traditionally used for hundreds of years to support the digestive system and to promote circulation.

Burdock Root – a member of the daisy family that originated in Eurasia – is now firmly established as a naturalized plant in North America. Herbalists value burdock for helping to detoxify the liver. The root is served as a food in Japan, where it is known as gobo. Resembling a long brown carrot, burdock can be prepared in the same way you might enjoy a carrot, such as fresh juice or in a stir-fry dish.

The root of a plant that many see as a pesky yard weed is a celebrated liver cleanser in the world of herbal medicine. Dandelion root has been traditionally used to support the liver, which in turn can support the skin.

Yellow dock (Rumex crispus) is leafy-green plant distinguished by its yellow carrot-shaped root. In herbal medicine, it has a long history of use as a detoxifying herb, as well as to support the skin and liver; for those purposes it is often combined with dandelion root. A mild laxative, it contains anthraquinone glycosides, the active ingredients also found in senna leaf. A rich source of iron, yellow dock root has been traditionally used to supply iron to the diet.

Clove Buds are the aromatic dried flower buds of a tree in the Myrtle family. The English name clove derives from Latin clavus (nail), as the shape of the buds resembles small nails. Clove bud is widely used as a spice in ancient Asian herbal traditions. With a warming quality, clove supports circulation and digestion.